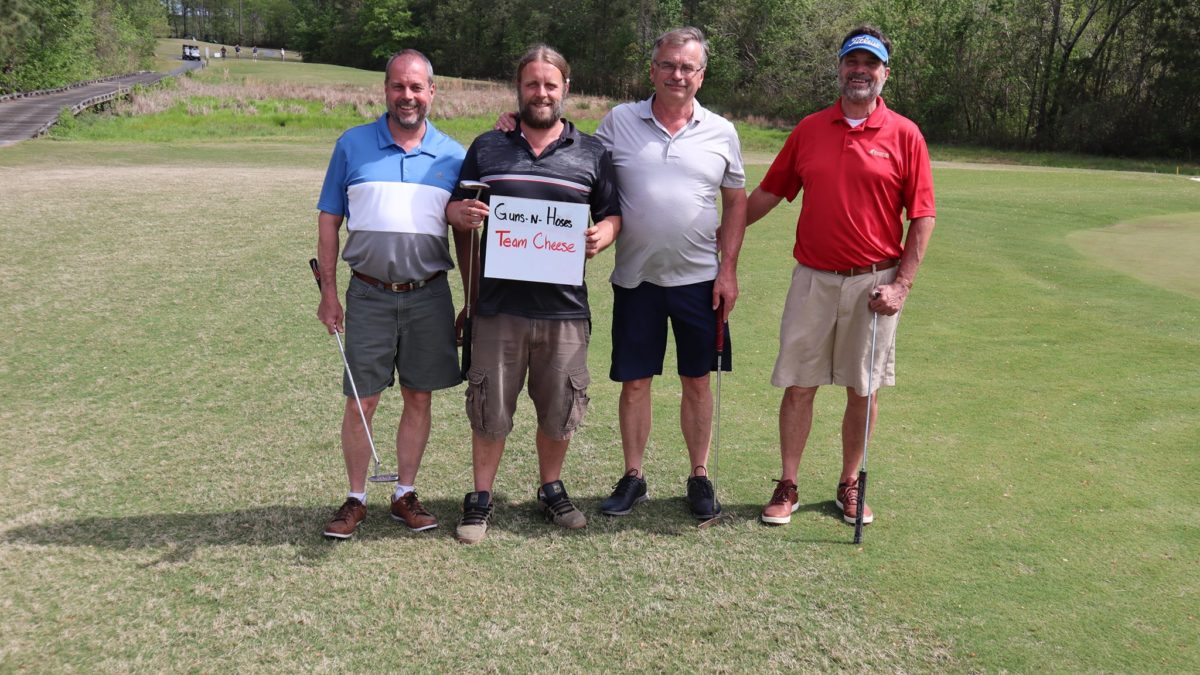 Amid the good times, good causes, and intermittent good golf, signs posted along the fairways at Bear Trail Golf Course provided serious reminders of the reason why the 9th annual Guns ‘N’ Hoses tournament was so important.

The signs displayed troubling statistics that show child abuse remains a scourge in our country. And they pointed to the reason organizations such as Onslow County’s One Place and its Child Advocacy Center play such vital roles in the community.

The April 17 event attracted 25 four-person teams, most of them active and retired law-enforcement officers and firefighters. The golf tournament and surrounding activities such as raffles and auctions pushed the amount raised for abused children over the nine years of the event past $105,660. This year’s event raised $14,428.

Jacksonville Police Department’s Jason Lagana was one of the organizers of this year’s event. “We had a great turnout,” he said after the conclusion of play. “We had a lot of great sponsors, as you saw…. It’s all for a great cause, for the children.”

Another organizer, JPD’s Daniel Karratti, said the success of the tournament is a product of a strong connection between One Place and local law-enforcement. “I love how we have worked together in the years I’ve been at the Jacksonville Police Department.”

Nick Strong was point person for the “Hoses” side – the Jacksonville Fire Department. After playing in the event for years, Strong noted a wave of enthusiasm from the players, still shaking off the impacts of COVID-19.

Strong said the fire service is always looking to make a child’s worst day a little better. “When we get to do it in a fun setting like this—going out in a golf tournament, raising money for the kids—they can have less days that are bad days. If we can prevent those days, that’s the best way for us.”

Child Advocacy Center Director Kathleen Holbrook said the three organizers had all played in previous Guns N Hoses tournaments and have been instrumental in keeping the event going. “It’s a relaxed, fun day with the goal of benefitting the Child Advocacy Center,” Holbrook said. “As detectives, Lagana and Karratti valued the collegial, collaborative, multidisciplinary approach to evaluating victims of child sexual and child physical abuse.”

The Guns ‘N’ Hoses tournament was conceived nearly a decade ago during a round of golf being played by two Jacksonville police officers, Steve Moquin and Jack Cohen.

Moquin has since retired but was around to tee it up for this year’s tournament, and he reflected on what motivated them to think about a charity fundraiser: “There were a lot of things in the community that could really use some help. We see a lot in our profession.”

The original idea was to rotate the charities that would benefit, but the then-fledgling Child Advocacy Center at the Onslow County Partnership for Children (later renamed One Place) served as the recipient at the first tournament and turned out to be a perfect fit. “We settled with the Partnership because we realized exactly how much they do and how little resources they had and how they spread them to the area they covered, so we thought, ‘This is our baby.’”

The first responders were impressed that the services provided by the CAC were without charge to victims and their families. But Holbrook noted that the center’s services are not free. “In fact, the service costs almost $900,000 per year to provide with multiple grants funding much of it and donations for the rest,” she said. “The Guns ‘N’ Hoses Charity Golf Tournament raises valuable funds that are used for supplies, equipment, and direct services to children.”

Holbrook said she and her staff are “indebted” to the first responders who work in partnership with the CAC each day ensuring local victims of child abuse are safe and receive the necessary services.

“It takes us all to protect the children of our community and to start the healing,” she said. “We are extremely grateful for the monies raised by the Guns ‘N’ Hoses Charity Tournament as it allows us to serve additional children. The Child Advocacy Center exists for the children of our community who need these services.  It fills our hearts to know we have this continued community support. We are all in this together.”

In addition to good times and fundraising at this year’s event, there was some golf played. Here are the tournament winners: