Sheriff’s Office Recognized by One Place 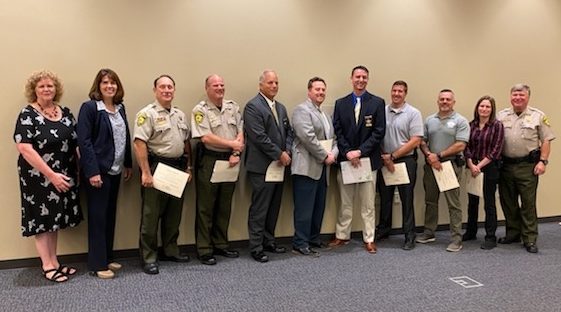 The united front that works every day behind the scenes on behalf of Onslow County’s abused children moved into the spotlight on Monday evening at the county Board of Commissioners meeting.

One Place administrators appeared before the board to recognize members of the Onslow County Sheriff’s Office who, above and beyond their usual duties to protect children, raised $760 at a May 14 Blood Connection blood drive and donated the proceeds to the One Place Child Advocacy Center.

On hand to present certificates of appreciation to Sheriff Hans Miller and his team of volunteers were One Place CEO Dawn Rochelle and Child Advocacy Center Director Kathleen Holbrook.

In making the presentation, Holbrook noted that the blood drive was held under challenging circumstances – “no small feat during the pandemic.” Another blood drive has been scheduled for July 30.

Several of the commissioners are former law-enforcement officers and spoke highly of both the Sheriff’s Office and One Place for their work, noting their own positive experiences with Holbrook and the CAC.

In a July 12 letter to Sheriff Miller, Rochelle noted that the Child Advocacy Center began working with the Sheriff’s Office Special Victims Unit in August 2010. “Since that time, the Child Advocacy Center has evaluated 1,342 children at the request of or who are being investigated by the Onslow County Sheriff’s Office in collaboration with DSS,” Rochelle wrote. “These children are victims of physical and sexual abuse, pornography and serious neglect.”

The average cost of forensic interviewing and a specialized medical exam is $1,865 per child, translating to a total expense of more than $2.5 million for the children directed by the county to the CAC.

One Place and the CAC are funded by grants and donations, so money raised through efforts such as the Sheriff’s Office-sponsored blood drive are critical to the program, Rochelle said.