Rochelle lifts hopes of children at One Place 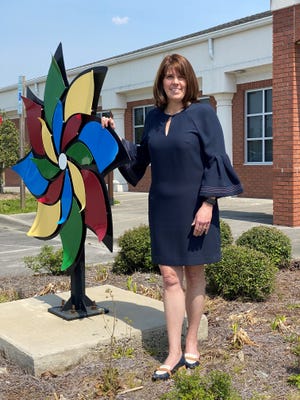 The Swansboro High School graduate had stayed in Onslow County to work in social services. With her personal life revolving more around raising her own young daughter, her professional interests narrowed, drawn toward the welfare of children.

When an opportunity came to join a new nonprofit agency centered on children, Rochelle looked past the uncertainties of a career move and committed to becoming only the fourth employee at the Onslow County Partnership for Children. Just 18 months later, she was named the organization’s CEO.

Over the next two decades, the agency developed into one of North Carolina’s model programs for child services. The Partnership for Children recently was re-branded as One Place to reflect its expanding role in the community, particularly in the areas of helping victims of child abuse.

It now has 66 employees with an annual budget in excess of $12 million. With the new name, it continues to develop ways to promote not only the physical well-being of children but also to provide emotional support and mental health services.

In Onslow County, where demographics are shaped by a dominant military presence, the welfare of children requires special attention. Statistically, the Jacksonville area has one of the youngest populations in the United States, with an average age of 25. Onslow also has one of the highest birth rates in North Carolina.

On top of the staggering numbers, natural support systems for young parents frequently are disrupted by duty-station reassignments and deployments. Addressing the community’s unique needs are social services in the county and aboard local bases. Nonprofit groups such as PEERS and the Partnership for Children have been an important part of the mix.

She recalled Hunt telling a story about driving near his Wilson County farm and seeing children playing in a red-clay ditch. “He said, ‘We are never going to get the graduation rate up with our kids spending all their time playing in a ditch.’”

In the past two decades, the scope of One Place’s work has increased by leaps and bounds. Still operating as a nonprofit that runs on both public funding and private donations, it continues its work with early educators and families to improve preschool programs. Other support for children and families includes providing early Head Start services for pregnant moms, infants and toddlers until age 3; and serving as a branch for Dolly Parton’s Imagination Library, which provides books to fuel the dreams of young children.

In 2010, the Partnership started the Child Advocacy Center and moved into the arena of fighting the sexual and physical abuse of children. It since has become a vital community hub for social-service investigators, law-enforcement agencies, medical personnel and families to follow up on reports of abuse. The center has its own staff to interview victims, conduct medical exams and provide therapy.

During the pandemic, the One Place Child Advocacy Center has seen its workload reach record numbers, increasing by as much as 35 percent. From March 2020 to March 2021, the center served 394 children.

As One Place’s role has become more diverse, Rochelle said, the mission remains the same: “To connect children and family in the community to resources that are needed.”

The agency continues to develop and change its services to keep pace with evolving problems, including the scourge of child abuse. “The idea of One Place, and what we want for families, is a place you can drive up to and you can exhale,” she said. “We want them to know that when they drive onto the property, somebody is going to listen to you and somebody is going to help you.”

Rochelle said the organization tries to stay focused on community needs. “We want to be very clear about what our role in the community is and what the community is asking us to do,” she said. “Where we have been asked to do more is around children who have been hurt.”

The biggest shortcoming in services for children in Onslow County is in mental health, Rochelle said. One Place is preparing to step forward into the void.

“We have said that we’ll own it,” she said. “We have to invest further in mental health services. We are slowly but surely moving toward the funding — being able to hire a clinic manager and to stand up therapists.”

The One Place staff will not look to duplicate already available treatment but rather focus on the needs now served by the Child Advocacy Center. “When children come in who have the potential of physical abuse trauma or sexual abuse trauma, those are not well-child checks,” Rochelle said. “The idea is to offer medical staff who are trained, who are specialized, and who are ready to go to court.”