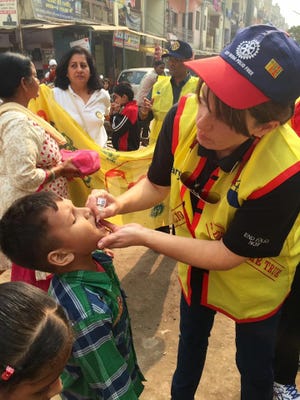 April is National Child Abuse Prevention Month. This article is part of a series on local efforts to combat child abuse, provided through cooperation between the Daily News and One Place. This article appeared in The Daily News on April 12, 2021.

While the Onslow County Partnership for Children became Dawn Rochelle’s calling when she joined the agency in 1999, she pursued other ways to give back to the community while sharpening her professional skills.

She founded her own leadership, wellness and consulting practice; and she became a force in Rotary International. “If you are not growing in a personal way, nothing else around you will grow either,” said Rochelle, now 55.

In addition to her work with the Onslow County Partnership for Children, a nonprofit agency recently re-branded as One Place, she started a consulting business called Dawn Rochelle Leadership when she reached her 40s. “It started with my need to be well, honestly,” she said.

At the time, she was tipping the scales at close to 260 pounds. Rochelle had been using her clinical licensing to continue work as a therapist, but Rochelle said the work made her feel inauthentic, “telling other people in their lives to do well and I was not.”

She tried various weight-loss programs, but progress proved difficult. “When you do therapy, you are sitting on your butt, and I was working a lot of hours,” she said.

It was a hectic time in Rochelle’s life. The Swansboro High School graduate had chaired the local United Way campaign and just completed a term as president of the Jacksonville Rotary Club. The Partnership was coming off a difficult budget year. Her mother-in-law fell ill and died.

Once she made the commitment to her own well-being, finally opting for bariatric surgery and eventually losing more than 100 pounds, she started thinking even more about leadership and wellness.

“The top people in the world pay attention,” she said. “They are not drinkers. They read a lot. They put themselves in proximity to people who think differently than they do. And they try to live a well life.”

Through her leadership program, which is an affiliate of the John Maxwell Team, Rochelle works with families and businesses on topics such as physical well-being, communication and personal development.

With an impressive record of achievement of their own, members of Rochelle’s family joined her leadership team as trainers. Her husband, Henry, was a standout college baseball player at Campbell University, where he set a NCAA Division 1 record by hitting five home runs in a game. Her daughter Taylor was a member of N.C. State University cheerleading squads that won two national championships.

Dawn Rochelle’s service in Rotary International has allowed her to extend her reach far beyond the traditional child-services community — and travel throughout the world for mission work. Since joining Rotary in 2004, she has served in various leadership capacities, including her present post as District Governor, working with 49 Rotary clubs in 14 Eastern North Carolina counties. Rotary is now organizing clubs around specific causes, not just geography, and Rochelle is forming a club for combating child abuse.

Ann Marie Raymond serves with Rochelle both at One Place as deputy director of programs and in Rotary. “Dawn has been my leader now for 15 years,” Raymond said.

Raymond said she believes faith is behind Rochelle’s stamina. “This is God’s business.” she said. “Everything that he sees that he wants us to be a part of, helping, it’s not work.”

For Rochelle, staying busy has been a way of life. “I have never just had one job,” she said. She has taught in graduate programs at various colleges, including East Carolina University, where she had earned her master’s degree after completing undergraduate work at the University of North Carolina Wilmington and Coastal Carolina Community College.

“I just let the doors open, and those doors just open to other things,” she said. “Having a dad who died early in life, I was never as a woman going to depend on anyone else to support me, ever. I am curious about so many things. God shows us so many things; it’s our courage that helps us walk into it.”