District Attorney has embraced CAC from the start 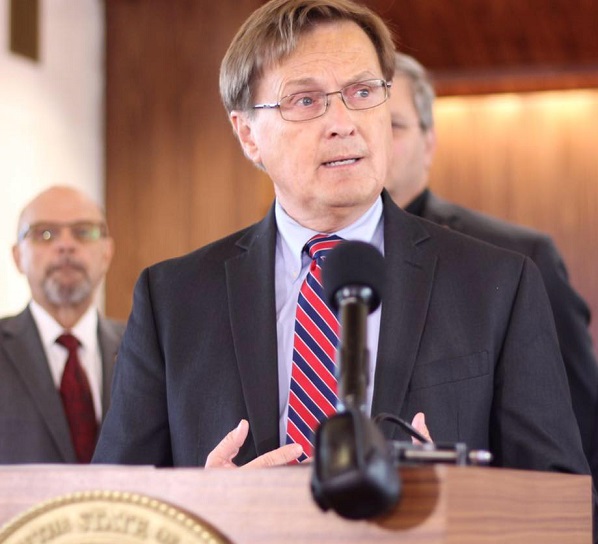 This is part of an ongoing series featuring community members and organizations that partner with One Place and its Child Advocacy Center to fight child abuse. This entry focuses on Ernie Lee, the district attorney for North Carolina’s Fifth Prosecutorial District, which includes Onslow and three other counties.

Ernie Lee was a young assistant district attorney in the late 1980s when he first heard about the concept of starting a Child Advocacy Center in Onslow County.

His boss at the time, District Attorney William H. Andrews, suggested that Lee join a local group of social workers, medical professionals, and law-enforcement officials who were developing the idea of consolidating victim interviews, medical examinations and other treatment, and advocacy services in a single family-friendly program operating under one roof.

Andrews had hired Lee just a couple of years earlier, and the recent Campbell University law school graduate embraced his new opportunity. “I am so glad I did,” Lee said in an interview at his office at the Onslow County Courthouse. “I met some incredible people.”

Still, it was a complicated assignment—with jurisdictional questions, tricky military-civilian intersections, and ever-present funding issues all to be hashed out. After the seeds were planted, it would be two decades before Onslow County’s Child Advocacy Center, now a part of One Place, would come to fruition. “It was a long time in coming for Jacksonville,” Lee said.

Thirty years after those initial conversations, Lee now finds himself in the office of district attorney, a position he has held for going-on 12 years. Working with the CAC on child-abuse cases has become routine for the DA’s Office and all law enforcement in Onslow County, and Lee was a full-fledged participant as the center moved toward achieving its potential. “I was there at the very beginning,” he said. “I was able to see it grow back in the late eighties, when it was really just an idea, into what it is now, which is an incredible place with incredible personnel who have truly made a difference when it comes to child victims in the county.”

In many ways, Lee has the perfect vantage point. As district attorney, the legal process winds toward the doorsteps of his office, so if breakdowns occur along the way, he and his prosecutors see the result. He and his wife Misti (a local resident who once was a newspaper reporter) have raised their three children in Onslow County during their three decades of living here, so they understand the concerns, even nightmares, of parents. And after serving 22 years in the Army Reserve, Lee has experience in the military judicial system.

Other people involved in the CAC’s development point to Lee as a key figure in the center’s success. Ann Marie Raymond, chief advancement officer for One Place, was one of the catalysts for finally opening the CAC as a function of what was known as the Onslow County Partnership for Children, recently rebranded as One Place. “Ernie Lee was an instrumental community leader and supporter in bringing a child advocacy center to our community,” she said.

“Knowing the cases that the CAC would serve, Ernie was a voice for the victims and educator to the community about why this service was needed and so valuable to have,” Raymond said.

As one example of the prosecutor’s commitment to the CAC’s comprehensive approach, Raymond points to Lee’s support for establishing multidisciplinary teams—consisting of law-enforcement officers, prosecutors, social workers and medical professionals who together oversee the handling of cases. “It was with Ernie Lee’s dedication and confidence, in the innovative approach CAC’s multidisciplinary teams created in response to child abuse victims, that the CAC services began in 2010. Twelve years later, Ernie and the Special Victims Unit continue their commitment to best serve child victims and hold more offenders accountable.”

Kathleen Holbrook, the CAC’s long-time director, noted that Lee was convinced the specially trained CAC staff who interviewed the young victims would be more in touch with the children’s emotional well-being and more effective in the courtroom as witnesses. He was willing to throw the considerable heft of his office behind making the concept work. There would be no shortcuts.

Lee has required law-enforcement agencies in the county to use the CAC’s interview and evaluation protocols before the District Attorney’s Office will bring a case to court, Holbrook said. “We have received some phone calls over the years from his office when a law-enforcement officer criminally charged someone with child abuse but did not bring the victim children to our office,” she said. “The criminal charges were placed on hold until the CAC step was completed.”

Lee created a Special Victims Unit within his office and designated an assistant district attorney to prosecute child-abuse cases. Holbrook said Lee has supported his staff attending case reviews and participating in training opportunities, working with CAC staff on such issues as accreditation.

The district attorney recently designated Caroline Wahoff to serve in Onslow County as his office’s prosecutor specializing in child abuse, sex crimes, and other forms of domestic abuse. Lee also has assigned a legal assistant to serve as a Victim Services Coordinator in those cases, using funding from a state grant. “Those cases deserve a lot of attention, a lot of effort, and a lot of time,” he said.

That all-in approach has instilled One Place administrators with confidence in Ernie Lee and the District Attorney’s Office. “His commitment for child victims and their families to have justice has not wavered since he became part of the planning for the center,” Raymond said. “I attribute a lot of the success of the CAC to Ernie and his staff. They are true partners in this work.”

North Carolina’s General Assembly recently awarded $8 million to One Place for construction of a new building to allow for the expansion of services to child victims and their parents. The project is expected to cost about $14 million, with the remaining funds to come from other public sources and private donations. Part of the expansion of services, already underway, includes providing mental-health treatment to all victims brought to CAC for evaluation.

“I have often wondered what happens to these children many years later, after we have prosecuted an individual and the victim, many times a young child, has testified in court. What happened when they grew up to become a teenager, when they were a young adult, when they were a middle-aged adult and a senior citizen?” Lee said.

The answer, while not an encouraging one, is that too many victims later find themselves sitting in a jail cell with their own set of troubles. The district attorney said providing victims with more closure could prevent them from becoming abusers themselves. “It becomes a recurring thing,” Lee said. “It is generational, just like drug abuse is generational. If you can reach these people when they are young, maybe it will reverse that trend.”

Click here to support the One Place Child Advocacy Center